How often do you do a full wash & wax

I’m fairly new to all of this but I really hate looking at my rig when its dirty. Bugs are the worst. I HAVE to get them off. 7 months in, I’ve done a complete wash 3 months in after driving through rain and just last week, though it didn’t really look like it needed it I had a wash and wax done because I wanted the wax there to provide some additional protection as we moved down the road.

All that said, how often should I actually be washing and waxing? My gut tells me maybe every 4 months or so but that’s not based on anything but gumption. How often do you folks give your rigs the full package?
John
2020 Ford F-150 | 2020 Newmar Ventana 4326

My coach is always a mess but getting the right cleaning equipment has certainly helped matters. I use a AR630 pressure washer which has been a joy as it works so well. It is compact but heavy so you can get a workout with it when not washing A 50ft hose helps so you don't have to deal with extensions, a foam cannon and proper wash soap, I use Mr. Pink. Wash and Wax All is highly recommended for routine care when not doing full washes/waxes. When it comes to waxing also getting the right tools helps and I use this polisher and tons of pads of various types. I use Rejex but also like Meguiars.

I wax once a year typically. If I am at a location where there is a good company that can do it then I much prefer to pay someone vs. do it myself. Naples has a great company (Mark Fields and his brother also does it). At Palm Creek Maldano does a great job. @ARD and I both got wash/wax while there.

Washing I'm not so good at as my coach is typically the dirty one, so be it. Some out there keep theirs like new, I'm in awe! I try, I do! And now that I'm armed with tools to make the job more enjoyable it helps (as long as I can remember where I put the hose!). As to CG's that allow washing, most will have it in their package we get at check-in otherwise remember "it's better to beg for forgiveness than ask for permission"

I'm going to do better now that I finally got the wash and wax all mop setup so I don't have to deal with ladders.
Last edited: May 15, 2020
Neal and Elli (Yellow Lab Copilot)
2017 Newmar Ventana 4037 on Freightliner, 1800W Solar (Victron Stack), HWH Active Air
2017 Chevy Colorado with Blue Ox and Air Force One

I get full wash as needed and try and keep up with Aero Cosmetics dry wash in between. On our 2017 DS it was waxed every 6 months when traveling. In the 5 months of having our 2020 DS, it has been gotten full wash 3 times, but no wax as of yet. Coach was painted in Oct 2019 and have been waiting the 6 months for curing, plan is full wash and wax in Polson.
I do remove bugs after each travel day and use 303 monthly on front.
Bill & Lisa
2017 Dutch Star 4018
2020 Dutch Star 4369

I have a little smaller equipment set than @Neal; a 1,600 PSI Ryobi electric pressure washer for getting the bugs off the front of the coach, a set of mops & squeegees with extendable pole for the windshield and a small, thin plastic card for major washes and annual waxes. "Arnie" at Hayes Detailing in Polson does a great job at what I think is a reasonable price.

My 2008 Discovery was my first full body paint RV. I purchased it new in 2008, and did very little to maintain the exterior. I routinely used the blue beacon truck wash, including the "acid", and never washed the front end after a days drive.

After about 3 years of ownership, I noticed it was looking a bit rough, and spent the big bucks to have a professional come out and wash it. He was the one that told me about the 3m bra, and the bugs. It was too late. I had him wax the paint, and stopped using the acid. The acid had destroyed the wheels, which are the same Alcoa wheels we have on our newmars.

I sold it in 2012, and the front end looked terrible. The dealer that I sold it to deducted $1500 from the purchase price after seeing it. I still sold it for $12k more than I had purchased it originally, so I felt good.

My 2013 was going to be treated different. I started the wash everytime we drove, and had a wax job done twice a year like clock work. Each wax job cost $750, and each time they did the wax, the swirl marks appeared to get worse. They would buff them out, but what happened is the clear coat eventually started to give out.

When I sold my 2013 DSDP in 2018, the paint still looked great. The 3m bra looked new, and the new owner didn't even notice the swirl marks until I showed him. Once you see it, you never "unsee" the swirl marks.

I had spent over $7000 having the coach waxed each time, and still had damaged clear coat, even though I was the only one that could see it until I showed it to someone.

On my 2019 I decided to spend the money up front. My coach was delivered with factory swirl marks, like 100% of all coaches and cars are. The paint correction was an 8 day ordeal, but in the end I spent a little under $7k, and have a 7 year finish.

Washing the coach is super easy, takes 1 hour from start to finish. No drying, and I can wash it in direct sunlight due to my DI water system. I keep 303 on the bra, and wash it daily when driving, and at the end of a trip. Sometimes I wash it mid day if I need to stretch my legs and do something besides drive.

So my advice is to pick one-- wax twice a year, or ceramic coat once.

I forgot about the DI rinse, absolutely critical otherwise use a water blade. I know the "how to" wash is beyond the OP's question of how often. I guess I need to step up my wax game to twice a year from the trend so far. But for DI rinse I carry this in the left aft storage compartment. 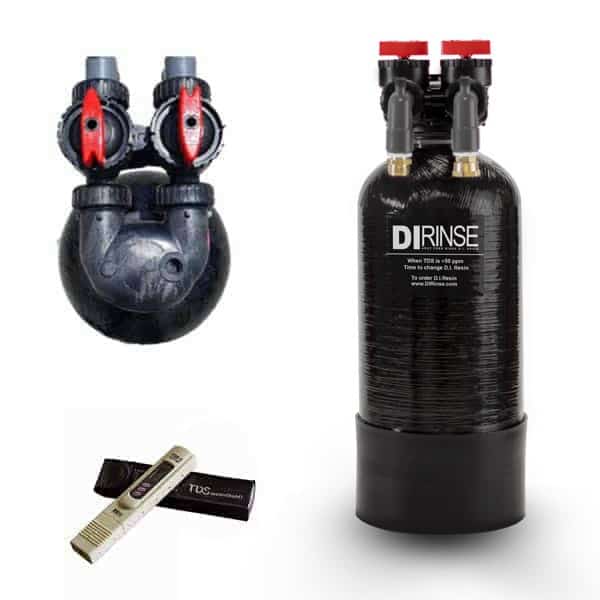 Get 2,000 gallons of DI water with 1/2 cubic foot of resin based on incoming water of 110 ppm TDS.The D.I. Rinse Pro 50 System is the perfect size for washing cars, boats, RV's, yachts and windows. It only weights about 35 pounds, making it very portable and easy to use.Flow Rate – 5 gpmSize –...

I thought about doing ceramic when we bought it but wasn’t convinced we’d keep it long enough to make that investment worthwhile. So far, I’ve always used the same thin plastic card tool that @TJ&LadyDi uses for wash and wax and for bugs, I have the same Ryobi 1600 PSI pressure washer that I hook up to the hot water tap in the generator area.

I’ve not invested in a DI Rinse because I’ve always paid someone else to do in a couple hours what would probably take me two days and when getting the bugs off the front, I just wipe down with some microfiber towels.

I ask how often though because of the swirls and other issues/concerns I might accidentally cause by possibly washing and/or waxing too often.
John
2020 Ford F-150 | 2020 Newmar Ventana 4326

To make the bugs easier to get off the front of the vehicle on long trips I use furniture polish (Kleene Guard). This does not replace your wax, but just a product I found the helps keep the bugs from sticking to the surface. Once you put a coating on then take the trip. Once done with the trip, spry another light coating and with the bugs off with a rag.
M

BGMAC said:
To make the bugs easier to get off the front of the vehicle on long trips I use furniture polish (Kleene Guard). This does not replace your wax, but just a product I found the helps keep the bugs from sticking to the surface. Once you put a coating on then take the trip. Once done with the trip, spry another light coating and with the bugs off with a rag.
Click to expand...

My only concern with using anything except soap and water on the front has been the Diamond shield.
I got a little freaked out when I read the flyer for it and it said not to get RainX on it. I’m no chemist but it just seemed like a harmless thing to get on a clear acetate film and makes me second guess putting anything on top of the Diamond shield except soap, water and wax.
John
2020 Ford F-150 | 2020 Newmar Ventana 4326

Wash and Wax All MOP with Deluxe Pole

Question Is washing bugs off your windshield washing your rig?

Question Equalization - how often do you do it?