I am contemplating getting a Hughes voltage booster surge protector ( I have a Hughes SP now) and I have been lucky so far and not had a bad campground pedestal yet. Some mount them in the electric bay on the back wall and some place the box outside. How easy is it to secure the box AND protect it from rain outside?

The Hughes website says the inside wall mount in the bay must be ventilated so how have people dealt with that? I read on the “other” forum about the pro and cons of having one and it seems to be a good investment to protect the coach albeit an expensive option.
Sheridan
Orinda, CA
2017 Prevost Marathon #1250 2015 Jeep Cherokee Trailhawk | AF1 and Roadmaster Nighthawk

I'm not sure I would be too concerned about space ventilation. The electric bay where you would mount it is not really sealed, and it is a marginally heated space hat is semi-open to the surrounding compartments. I suppose if it was a concern, you could mount a 12VDC computer fan in the compartment and control it with a low-temp thermostat.

I have the 50A Hughes Autoformer and highly recommend it. I internally mounted it as I fried my first one in an unexpected rain and it was 1/3 submerged in water as the pedestal was a low area. Hughes helped me out in that ordeal. It's always inline, never an issue and you never when you may need it. If you wait for the brown out then it's too late. It is also nice in that it has lights to show you when all green your connection and voltages are good.

I also use a Progressive Industries 50A surge protector at the pedestal. Probably overkill but it does give me lights to show me the pedestal is good and hopefully protects the cord reel as well. 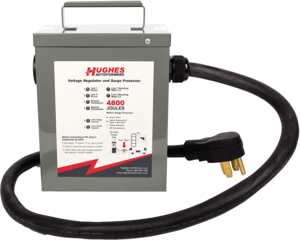 Help support this site by becoming a RVF Supporter.​
M

@sheridany do you actually want the Autoformer for the boosting capabilities or are you just looking to protect your coach? If the latter, the Progressive Industries 50A Surge Protector @Neal mentions would do just fine (and your wallet would be happier). There’s also the 50A Power Watchdog from Hughes Autoformer as well which is what I have. They have both hardwire (inside the bay) and portable (plug into the pedestal) versions and I like that I get notifications on my phone if the Watchdog disconnects me.

As for locking them up, its not too bad. The portable watchdog comes with a small steel
loop already wrapped around it for you to thread a cable lock through. It’s pretty small though so I went to Lowes and got an 8’ strands of nylon coated cable, ran it through the Watchdog’s steel loop right there in the aisle then had them clamp the cable ends into loops. There’s usually something to lock it to but sometimes you have to get creative. Some folks I’ve seen just wrap their chain or cable real tight around the pedestal.
I also carry a u-bolt and fence clamp in case I need to make my own security mechanism by bolting those around the pedestal. It also just occurred to me that attaching a small bell to make some noise if someone is messing with it might be a good idea.

None of this will stop a determined thief but it’ll slow em down enough to deter them from trying...or give you time to take proper aim.
John
2020 Ford F-150 | 2020 Newmar Ventana 4326
"You can't triple stamp a double stamp, Lloyd!"

I’ve got the Progressive 30A version for my current coach. I have a bike cable lock that has an alarm on it. It gets moved, it goes off. LOUDLY. The one I have is no longer on Amazon, but it’s like this...

I started out with locking things up and then stopped all that. I don't lock my surge protector, I don't lock my on the go water softener. I guess I'll wait for a lesson learned and go from there but I just don't hear much of people stealing things. But I did learn to lock basements at night, was at a campground once when on my Passport America Caravan and heard kids were going into coach basements and I'm sure other things were vulnerable but didn't hear of anything getting stolen but that was the only situation to date for me.
Neal and Elli (Yellow Lab Copilot)
2017 Newmar Ventana 4037 on Freightliner, 1800W Solar (Victron Stack), HWH Active Air, Drainmaster Electric Gates, Boogey Lights
2017 Chevy Colorado with Blue Ox and Air Force One

@MapNerd I have the progressive surge protector for the pedestal already but thinking about getting the voltage booster to prevent low voltage incidents that I have read about but not experienced it firsthand. Trying to be preventative instead of having to pay for some expensive repairs after the fact.
Sheridan
Orinda, CA
2017 Prevost Marathon #1250 2015 Jeep Cherokee Trailhawk | AF1 and Roadmaster Nighthawk

How To Improve storage in your Newmar motorhome