How To Installing a GE Advantium Microwave in a Newmar Motorhome

My 2017 Newmar Ventana came with a whirlpool microwave which I was content with but it was definitely under powered. Food always needed extending cook times such as frozen dinners, etc. I never used the convection oven features of it. In my online RV community readings the GE Advantium seemed to be highly praised and it's a high line option for Newmar's diesel pusher lineup so I figured I'd give it a try even though I'm not a fan of GE appliances. With the "My Lowes Card" being a veteran I was able to get 10% off. No matter where you buy be sure to get the protection plan as we recently had someone that got one from Home Depot and it died after first use and Home Depot has an insane 48 hour window for problems before it kicks off to GE to handle via service.

I was going to have Newmar install this during a visit last December for a windshield replacement but the GE Advantium's can be hard to come by at times. Long story short mine didn't arrive in time so I asked the Newmar techs how to install it and I'm glad I did. Newmar's cabinet design requires screws to be installed at the front top and the screws go up and into the cabinetry above. This is not the normal way to install an over the range oven which normally has top down bolts. I had also learned that the GE Advantium was not as deep and you had to install a backer board to bump out the GE Advantium to ensure clearance when the microwave door was opened. Also of note before I forget is Newmar installed a drawer latch mechanism under the Whirlpool door to latch it closed as it's a bigger and heavier door and this latch is not required on the GE Advantium. By the way Newmar has a horrendous markup on this microwave at about $1900 with $200 or so estimated labor to install. You can get the microwave on your own for around 1100-1200 prior to discounts.

When receiving your GE Advantium you'll remove the mounting bracket off the back and also change the orientation of the blower whether you're venting indoors or outdoors. It comes in the external/outdoors venting configuration. Install the backer board, I suggest 3/4 inch plywood. Next is alignment. I had problems with this and did mine several times before I got it right then when @Buly and I installed his I emphasized the alignment and we came up with a good plan. I set two small ottomans on the kitchen counter on top of a cloth/towel/comforter whatever you choose to protect your counter so that we could rest the microwave on something to keep it near the install location. You want the microwave to be level when the coach is level. Beware that Newmar has an odd cabinet design that slants down toward the front on the bottom. You want the microwave centered in the 30 inch space as well so do your measurements and determine where the mounting plate in the back needs to be. We measured from the front top down, then marked the back plate of the same to determine where to install the back bracket. Be careful measuring bottom up as again the bottom of the cabinets are not level, then slope down as they come towards the front of the cabinets.

With your mounting plate (back) installed you can feed the power cable through the hole to your outlet upper right and then rest the microwave in the back bracket. Get your left/right orientation, i.e. center it, then raise up the front and carefully install the screws, I recommend a 45 degree angle towards the back and about 5-6 screws. We drilled holes in the top of the microwave first as to where the screws would be installed prior to placing the microwave for final mounting. I preferred T-20 screws so you don't deal with stripping phillips head screws. Drill slowly so as not to crack the cabinetry and don't overtighten.

Overall it's quite simple and doing this yourself you'll save $1k and if you finance your motorhome the cost over X years is even more so some things like this are better done aftermarket if you can and are willing.

In my opinion the GE Advantium microwaves significantly better than the Whirlpool. As to all of the other cooking features I leave it to the chefs around here. I have cooked pizzas, sweet potatos, and a must test - cinnamon buns 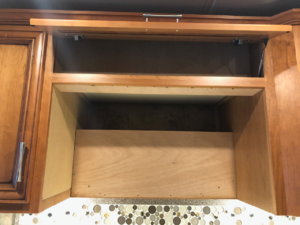 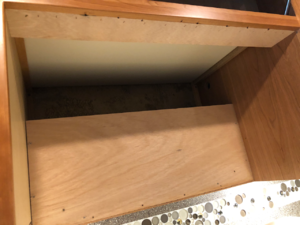 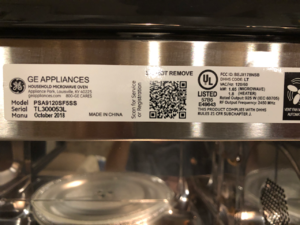 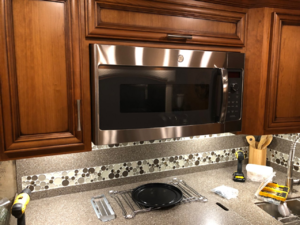 Here is a photo of me and Neal wrestling the microwave in place. Well, I guess we can say "that's the long and short of it!"

Why punch a bunch of holes through the front of the microwave? That was how Newmar mounted my original Whirlpool and it looked like they did it just to save time. The Advantium comes with two mounting bolts that can go right through the spice rack cabinet above the microwave. That’s how the the directions that come with the Advantium show to mount the unit and it sure seems better than drilling holes through the steel microwave case.
Jerry & Judy, Dusty the mini Labradoodle
2017 Dutch Star 4018
Freightliner, HWH Active Air

I asked the techs how to install it prior to getting my advantium as mine didn’t arrive in time for them to install it and that was their instruction. Hopefully that part of the cabinet floor is strong enough. That seems to be how Newmar installs them and it hasn’t worked in my favor to outsmart them.
Neal and Elli (Yellow Lab Copilot)
2017 Newmar Ventana 4037 on Freightliner, 1800W Solar (Victron Stack), HWH Active Air
2017 Chevy Colorado with Blue Ox and Air Force One

J&JD said:
Why punch a bunch of holes through the front of the microwave? That was how Newmar mounted my original Whirlpool and it looked like they did it just to save time. The Advantium comes with two mounting bolts that can go right through the spice rack cabinet above the microwave. That’s how the the directions that come with the Advantium show to mount the unit and it sure seems better than drilling holes through the steel microwave case.
Click to expand...

Good for future installers to know. Thanks for sharing.

How hard was it to get the floor carpet stuff up?
Neal and Elli (Yellow Lab Copilot)
2017 Newmar Ventana 4037 on Freightliner, 1800W Solar (Victron Stack), HWH Active Air
2017 Chevy Colorado with Blue Ox and Air Force One

@ARD recently requested an estimate to have it done after the build, i.e. a service visit. I think she was quoted 1900 for the oven, add labor to that. Glad getting it with the coach is a little cheaper. Be sure those that get it aftermarket to get the protection plan on it!
Neal and Elli (Yellow Lab Copilot)
2017 Newmar Ventana 4037 on Freightliner, 1800W Solar (Victron Stack), HWH Active Air
2017 Chevy Colorado with Blue Ox and Air Force One

i believe I just drilled right through the carpet cover. Just two holes and you can snug that sucker right up tight against the upper cabinet.