I'm late to this game and finally got on board with the water softener two years into my RVing experience. I bought one knowing I would be traveling to the great south west for the winter but got caught off guard on an east coast location in Cape Charles, VA with hard water. I use this all the time now and it's no hassle. Regen is simple per the YouTube video below done by simply adding salt. After the regen is complete you do not taste or smell salt, some chemist knows what they are doing! I have heard to try to keep it out of the sun and of course like your city water connection stow it at night if going below freezing temps. Works great, shower glass remains clean but it is not something to use for RV washing as that's what DI rinse is for, this is not DI rinse. We are certainly enjoying our OnTheGo.

It was getting to the point I was adding salt every 2 or 3 weeks (large model). Another Newmar owner was talking to me up north a couple months ago and asked me how often I was back flushing it. I have had it for about 5 or 6 months and NEVER back flushed it. I actually forgot all about doing that!

Needless to say I looked up the process and did it, plus put in a couple containers of salt because it was due. It is lasting a month or slightly longer now since doing the back flush.
2017 Ventana 4369 - Toad: Tandem Tow hauling a Harley Trike & KIA Sportage SX
Full Time Traveling This Great Country

I have heard nothing of this requirement/suggestion to backflush it. Do you have any info or links on the process? News to me. Thanks for sharing the tip.
Neal and Elli (Yellow Lab Copilot)
2017 Newmar Ventana 4037 on Freightliner, 1800W Solar (Victron Stack), HWH Active Air
2017 Chevy Colorado with Blue Ox and Air Force One

Tizbad (from iRV2) forum was in the same Illinois CG as me recently. He (Stu) has one of these softeners and we were talking about how well they performed. He asked me how often I found it needed back flushed and I was like "what????"

He told me you had to do it every few months. I dug out my literature and sure enough it said to back flush every 3 months for 2 - 5 minutes. You just take your hoses off and blow water through it in reverse. I bypass my second whole house filter of course and just back flush the softener. Mine certainly needed this procedure because my salt is lasting much longer now.
2017 Ventana 4369 - Toad: Tandem Tow hauling a Harley Trike & KIA Sportage SX
Full Time Traveling This Great Country

Regarding the regen cycle, a simple hardness test should indicate the effectiveness of the softener. Simple test of water before and after the On The Go softener should indicate when you need to regen the On the GO.
We used the On The GO extensively on our last six week cross country through the South and Southwest this Fall. We regenerated mid trip. Water was satisfactory throughout the trip. BTW We do not drink or cook with the water stored in the RV, prefer to drink and cook with bottled water when traveling.
Joe (aka GOODXRVN)
2018 Newmar CanyonStar
Dolly and Passat sedan
W4JCH
G

I have this one: 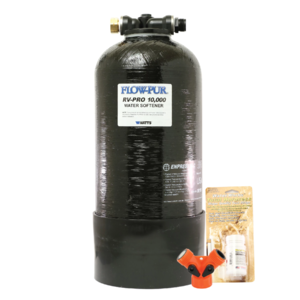 Regeneration should be performed when the hardness
from your system exceeds 3 grains per gallon as indicated
on the supplied water test strips
Click to expand...

Mntom said:
I have this one: View attachment 189. The instructions state . I use it every place we go. I probably should back flush it since I forget about that and have never done so.........
Click to expand...

BuckyII said:
I was thinking about getting the On the Go...are there some advantages to the Flow-Pur?
Click to expand...

I don't know if there is any advantage of one over the other. Mine is a 10,000 grain unit and regens use 2 pounds of salt per.I usually only dump in one container. The round containers only hold 1lb 10oz so I regen slightly more often. I certainly don't want to go without it.
2005 Dodge Ram 3500
2017 Hemisphere 346RK

Time to revive this thread...

I'm about to purchase an OTG water softener...debating between the 8,000 vs 16,000 models. The 8,000 would certainly be easier to store and setup. However, does the need to regenerate more frequently outweigh that? Are there other advantages of the larger model/disadvantages of smaller model?

We went with the large one for a couple of reasons. With my Newmar model I knew I would never plumb it to be used inside my wet bay and it would always be something I would set up outside, so the larger size was not a factor there. The other factor was being full time it would be getting used 365 days a year so I felt larger was better.

I do have mine ratchet strapped onto a cheap hand cart. Even after adding an extra whole house filter it is pretty easy to wheel around and store in a curb side storage bay. I do empty most of the water out prior to moving it and that lessens the weight a lot.

Just a side note. We wish we would have purchased one of these years ago.
2017 Ventana 4369 - Toad: Tandem Tow hauling a Harley Trike & KIA Sportage SX
Full Time Traveling This Great Country

I'm about to purchase an OTG water softener...debating between the 8,000 vs 16,000 models. The 8,000 would certainly be easier to store and setup. However, does the need to regenerate more frequently outweigh that? Are there other advantages of the larger model/disadvantages of smaller model?

I'm solo and I got the large one and I think you'd regret getting the smaller one. I want to do regens as little as possible, it's just another maintenance task that if I can put it off then that's better. Yeah, it's a little heavy but it's manageable.

We also went for the large size. If you can manage the size it is a good choice. Regenerating can use a lot of time and water. It may take some time to find the right spot to perform this service. We were lucky on our trip this fall and found state parks with plenty of water and drainage to regen the unit. About once a month or so for us.
Joe (aka GOODXRVN)
2018 Newmar CanyonStar
Dolly and Passat sedan
W4JCH

@Neal , @JoeHogan Thanks for your input.

I just ordered the larger unit from Camping World. Total $211.33 (+tax, includes shipping). I was concerned about the model...their website lists it as the OTG3, whereas Amazon lists theirs as OTG4. I called OTG and was assured they are in fact identical...different model numbers for internal marketing purposes only.

When I hear statements referring to “salt lasting longer”, it‘s obvious that the water softening and regeneration process is not fully understood. I looked at the On The Go website and sure enough, as expected, they had a very concise definition. It is here:
[begin copy & paste]
How Does a Water Softener Work? The principle behind water softening is really just simple chemistry. A water softener contains resin beads which hold electrically charged ions. When hard water passes through the softener, calcium and magnesium ions are attracted to the charged resin beads. It's the resulting removal of calcium and magnesium ions that produces "soft water."

Regeneration involves soaking the resin in a stream of sodium ions. Salt sodium chloride, so the water softener mixes up a very strong brine solution and flushes it through resin (this is why you load up a water softener with salt). The strong brine displaces all of the calcium and magnesium that has built up in the resin and replaces it again with sodium. The remaining brine plus all of the calcium and magnesium is flushed out. [End copy & paste]

All references to: Learn - On The Go - Portable Water Softener

I can agree to a statement about periods between regenerations are longer since implementing a periodic backflush, but making salt last longer is just plain incorrect. The need for regeneration is determined by using test strips. After a while, your skin will replace the test strips. You’ll know.
Randy B
2017 Ventana LE 4037
2021 Chevy Trailblazer RS

This is what I use but OTG says not required:

I hung a 10" filter on the side of my OTG softener. I use a cheap 5 micron filter in it and change it the same time I change my WH filter, which is every month or two.

The double is the best.

I've gone a full year without backflushing or a Regen. Just tested it the other day, and it's still cranking out really soft water!

I bought two large black Bin trays from Home Depot, and put a section of small pool noodle along each side, glued down, to form a cradle for both my DI and SW tanks. They lay flat in the bay on the wet side. My process is to pull them out BEFORE putting the FWS out, which REALLY saves the back.

My quick connect system is a GODSEND, and I can hook everything up in about 20 seconds.

CaptainGizmo said:
The double is the best.

I've gone a full year without backlashing or a Regen. Just tested it the other day, and it's still cranking out really soft water!

I bought two large black Bin trays from Home Depot, and put a section of small pool noodle along each side to form a cradle for both my DI and SW tanks. They lay flat in the bay on the wet side. My process is to pull them out BEFORE putting the FWS out, which REALLY saves the back.

My quick connect system is a GODSEND, and I can hook everything up in about 20 seconds.
Click to expand...

BuckyII said:
@CaptainGizmo , looks like a nice setup. What kind of filter is that ahead of the OTG?
Click to expand...

That’s a Camco pre-filter. I always use one before my SW tank or fill-hose.