Tip Getting packages while at a State Park

On this trip I learned that some, not all, Post Offices accept what's called General Delivery. This is a service for people like us that don't have an address that want to pickup mail and packages. I learned this when I was at Kartchner Caverns as many state parks won't allow deliveries. The sad thing I learned in Tucson is not all Post Offices take general delivery. I made an assumption it was something that every post office offered so I had two things coming to the post office near the SP I was heading to. Nope, the usual fun of dealing with USPS but luckily there was a nice lady that did hold my two packages for me before they went to Phoenix then to the main post office in Tucson.

So the lesson is that if you're going to a CG such as a SP that won't allow packages and you need something sent then ask the local post office where you can have general delivery sent and that's a way to get anything from UPS, FedEx, Mail, Amazon, etc.
Neal and Elli (Yellow Lab Copilot)
2017 Newmar Ventana 4037 on Freightliner, 1800W Solar (Victron Stack), HWH Active Air, Drainmaster Electric Gates, Boogey Lights
2017 Chevy Colorado with Blue Ox and Air Force One

Regarding mail we have not found a reliable way to get delivery. We are still investigating Mail Services.
Regarding packages, depending on where you are sourcing your package, many retailers provide choices. Amazon has Lockers you can use, see here Amazon.com Help: About Amazon Hub Locker . Home Depot has lockers and/or will hold at any specified store.
Also, for packages that are sent from individuals, we have planned overnight stops at campgrounds just to pick up packages that the campground was kind enough to accept for us.
The problems we have found is when shipping arrival dates are uncertain. Then general delivery at a post office or UPS store front with notification is probably a better choice.
Joe (aka GOODXRVN)
2018 Newmar CanyonStar
Demco Dolly and VW Passat sedan
W4JCH
G

If you are going to be at any campground for a while just ask about mail and packages when you check in.They will probably know of the best way to get mail and packages.
2005 Dodge Ram 3500
2017 Hemisphere 346RK

I haven't used the Amazon locker thing yet, I do need to check that out as where I just arrived "Usery SP, Mesa, AZ" would be ideal for that.
Neal and Elli (Yellow Lab Copilot)
2017 Newmar Ventana 4037 on Freightliner, 1800W Solar (Victron Stack), HWH Active Air, Drainmaster Electric Gates, Boogey Lights
2017 Chevy Colorado with Blue Ox and Air Force One

I used an Amazon locker and it worked great. In this case it's not a locker, it's a designated business (GNC for this area) that handles package delivery. Great system for travelers like us, super easy.

JoeHogan said:
Regarding mail we have not found a reliable way to get delivery.
Click to expand...

Same with us. And, even when we think we've found a way, USPS screws it up! Two years ago, we spoke with the postmaster and requested a 45-day "mail hold" (30 days is maximum without postmaster approval). He accepted our request and approved it. Two weeks into the hold, a neighbor calls and says we have mail falling out of our rural mailbox. It took another week to get USPS to actually initiate the hold. Never did get a satisfactory explanation of what happened beyond "it was probably a fill-in carrier."

Last year, we set up a temporary change of address for the two months we would be at our Montana place. After three weeks of getting no mail, I called the postmaster in our base city. It took him another week to figure out why we weren't getting our mail. Our son went over and checked our rural mailbox; it was jammed full. Seems like someone misread the temporary change of address as a mail hold. Go figure.

On our recent trip West, I used UPS Stores many times to receive packages. They charge $5-$10 , but in my case it was worth it. Just called ahead and asked if I can do it, and had no problem.
Bulent “Buly”, Doris and MaltiPoo Miss Daisy
2015 DS 4369 TGO Titusville, Fl

6
Question getting mail while snowbirding

6
Question getting mail while snowbirding 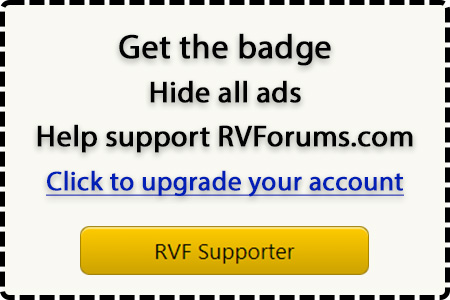